The Vlahokerasiotes Associaton of Attica 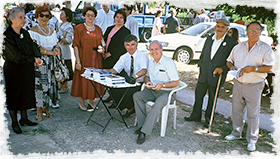 The “census” of Vlahokerasiotes (1988-1992) which was done under the aegis of the Vlahokerasia Association of Attica (V.A.A.) revealed that 42% of Vlahokerasiotes lived in Attica (Greater Athens)[1]. Apparently, the greater metropolitan of Athens, with a concentration of services and industrial units, functions as an alternative destination and place of employment for Vlahokerasiotes (and Peloponnesians generally), who sought to escape from hardships of agriculture but had no opportunity or no desire to emigrate to overseas countries (U.S., Canada, Australia) during the first part of the 20th century (1900s -1950s).

Although the internal migration (i.e. urbanization) cannot be compared with emigration to a foreign country because of the common language and culture between the migrant population and the native urban population, there were indeed many similarities with emigration in regard to the processes of adjustment, integration, social mobility and maintenance of local traditions in the “melting pot” of the capital.

The Vlahokerasiotes of Attica may have abandoned their farm fields, vineyards, herds, and their mills, but they never forgot their home village. Almost all of them renovated their father’s homes while some built new houses in the village They return to the village en masse during the holidays, the summer, and often on weekends, to escape from the urban life, to partake of the verdure and to inhale the revitalizing clean air of the Skiritida Forest. However, except for the personal and family progress they brought to the village, they also established associations in Attica, to maintain contacts, to exchange memories, to combat the alienation endemic to large urban centers and, more important, to contribute to the cultural, spiritual and economic development of their birthplace. The first association –the predecessor of the Vlahokerasiotes Association of Attica – was established in 1929. It operared for, as yet, an undetermined number of years. The association activities of Vlahokerasiotes, as well as those of other local associations. were affected by the intervening events, such as the Second World War, the Civil War (1946-49) and the Dictatorship (1967-74). There was sporadic associational activity ιn the 1950s─early 1960s and after the fall of the dictatorship. The “Vlahokerasiotes Association of Attica – Prophet Ilias" – was reactivated in the early 1980s and was active for nearly 30 years (1984-2010). Since 2010, the Association has remained inactive. The present thematic unit concentrates on the “Vlahokerasiotes Association of Attica – Prophet Ilias” and its activities, without, however, overlooking the contributions of the founders.

We begin the present thematic unit with materials and hyperlinks which take us back to the 1920s and 1930s. Lacking a group picture of the 11 founding members of the “Athens and Piraieus Association of Vlahokerasiotes – Prophet Ilias” we made a collage of five founding members for whom we had photos. In turn, the photo/collage was hyperlinked with the statutes of the original association, where at the end, the visitor can see the names of the all (11) founders. Except for a photograph of an excursion to the village (1930), we have no other materials (photos, documents etc.) on the activities of the first association, until the 1950s when some of the founding members appear in a banquet, together with other compatriots. The gaps in associational activities (e.g. 1930-1950) are accounted for in a brief history of Vlahokerasiοtes’ Associations written by Angelos Bistolas (See hyperlink accompanying the caption of his photo). We invite compatriots, wherever they live, who have such materials in their archives to make it available to the Committee.

We then proceed with photographic materials and hyperlinks referring to the decades of the 1960s and 1970s, before and after the fall of the dictatorship, when the Vlahokerasiotes Association was still functioning under the name «Association of Athens and Piraieus Vlahokerasiotes – Prophet Ilias” For these periods we have photos of two former presidents, Panagiotis Sotos (1959-63) and Ilias Zahos (1976-1978). Their photos are hyperlinked with copies of original documents pertaining to public works done in the village during their administrations, for the installation of the village clock, the completion of the Church of the Assumption in 1963 and the cementation of the dirt roads (1976).

The last part of the present thematic unit is concentrated on photo materials and hyperlinks referring to the activities of the “Vlahokerasiotes Association of Athens – Prophet Ilias” during the period 1984-2010, and the successive administrations of compatriots Spyros Kotsinas, Angelos Bistolas, Stefanos Sotos (son of Panagiotis Sotos) and Eleni Zeppos. The photographic materials focus on various activities of the Association that took place in Athens, such as the inauguration of the Association’s new offices, the “census” of Vlahokerasiotes and banquets, activities which took place in the village (Bazina Days, Remembrance Days, backgammon contests, dedications to 1821, celebration of Prophet Ilias Day) and excursions to various cultural sites. This subcategory of content is further enriched by several hyperlinks consisting of documents and video clips. Activating the various hyperlinks, the visitor will view/read:

A crucial importance project involves the digitalization of the archives of the “Vlahokerasiotes Attica Association’s” newspaper, “The Voice of our Village” (1984-2008). The digitalization was done for the VDM upon the initiative of compatriot Angelos E. Bistolas, former President of the Association. The visitor is invited to activate the hyperlink/introduction to the digital archives and the digital archives themselves. They are suitable both for personal and research purposes. As you will observe yourselves, a number of texts from the press archives, of folklore and research interest, has already been incorporated in various thematic units of the Vlahokerasia Digital Museum.

[1] See Part II: “Demographic and Administrative Changes in the Community of Vlahokerasia” in the monograph, Vlahokerasia: History, Demography and Folklore (Athens 2014), written by Angelos Bistolas et al., for the needs of the Vlahokerasia Digital Museum. The monograph can be found under the menu category “History – Traditions”.