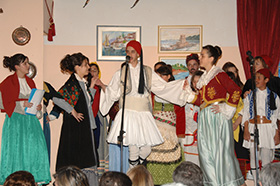 [1] Τhe legal framework which determined the system and structure of education in Greece, up to 1895, was that of King Otto[2] , with a four-year Elementary School, a three-year “Hellenic School” (Scholarcheion) and a three-/four-year Gymnasium.
Following a succession of education laws (1895, 1913 and 1929), basic education (Elementary and Junior High School) evolved into a six-year Elementary School and a six-year Gymnasium/Lyceum[3].

The children who were born during the decades of 1890-1920 were enrolled in four-year elementary schools hosted in private houses ― those of Stratis Apostolopoulos (“Vardalas”), father of Christos Apostolopoulos, Court of Appeals Judge (See “Vlahokerasiotes” in Politics and Justice”) and of Constantinos Iliopoulos which later housed the supermarket “Tsoulamanis”. Many of the children at that time (especially the girls) did not attend school at all and remained illiterate all their lives or discontinued their schooling after three/four years of elementary education. The girls were destined for marriage and family and the boys for helping out the parents with the land and/or the herds of goats and sheep. The children who managed to finish the four-year elementary school continued their schooling in the three-year “Hellenic School” (or Scholarcheion) of Tripolis (capital of Arcadia) or the one in Vlahokerasia housed in a building that later hosted the police station, the Municipality of Skiritida and now hosts the “Municipal Area of Skiritida” and the “Local Community of Vlahokerasia”. The more ambitious parents, who wanted their children to continue their education after the “Hellenic School” (the Scholarcheion), sent their children to secondary schools in Tegea or Tripolis, at least until the Junior H.S. of Vlahokerasia started its operation (1964).

The end to the fragmentation of school infrastructure came with the construction of school buildings the main school building for Elementary and Junior H.S. education and another for the Scholarcheion. The construction of the school buildings started in 1927 and was completed in 1929. Both were subsidized by the omogeneis Vlahokerasiotes and specifically by the “Brotherhood of Vlahokerasiotes” in Pittsburgh Pennsylvania. The school, at least on the elementary level, started its operation with the 1932-33 school year[4]. For the elementary school level, the visitor is urged to open the hyperlink/article by Constantinos Krekouzos, “Primary Education in Vlahokerasia, Then and Now” which was first published in the “Voice of our Village” (12/1996). In regard to its operation as a high school, the visitor is invited to read the relevant history (hyperlink) which was written by secondary school teacher and for many years Director of the Vlahokerasia Junior H.S., Kiki Katsafanas. The school of Vlahokerasia (at both levels) attracted students from all the villages in the region (Vlahokerasia, Arvanitokerasia, Alepochori, Pigadakia, Manari, Kollines, Kaltezies etc.).

The materials in the present unit deal with both levels of basic education, although most of them are concentrated on the Junior High School level. We begin with materials that concern the school building and the surrounding area, the bus called “Tagarou”, the traditional school dress, the arrival of former teachers in the village, a school class, the Junior H.S. gymnastics demonstrations and the national holidays during the decades of the 1960s-1970s. The unit continues with materials on various classic footraces in the schoolyard, which after the 1960s’ is continuously expanded so that it can host more and more athletic activities. The subcategory is enriched with hyperlinks which refer to (1) the bus called “Tagarou”, that played a significant role for young Vlahokerasiotes who continued their secondary education in Tegea and Tripolis – a hyperlink also accompanied by relevant excerpts from Anna Iakovou’s children’s book with the same name (2) the registration of students in educational associations and (3) an invitation from the “Center for the Adult Education of Vlahokerasia to “all” the Vlahokerasiotes to attend lectures.

Next, we follow up with materials on theatrical performances. This sub-category begins with a unique photograph from a theatrical performance in 1940-41, organized to express solidarity for the soldiers fighting in the Albanian Front. We continue with a rich collection of photographs from the archives of Kiki Katsafanas on theatrical performances of historical, folk, literary, artistic and cultural interest. A representative sample of the theatrical performances pertaining to 1821 (Mavrogenous, Bouboulina, Sekeris, Filiki Etairia), the Skiritida Forest (the Stefanou vision, a poem dedicated to the forest), the Asia Minor Disaster/Refugees of 1922, several traditional occupations (knitting, spinning, weaving, embroidering) and emigration (xeniteia) are accompanied by hyperlinks/ video clip. The subunit closes with photographs from: (1) school excursions in different periods (2) school drawing groups (3) national anniversary events in the churchyard and (4) the last student celebration of national Independence (“Regeneration”) Day.

The photos in the last two cases (#3 and #4) are accompanied by corresponding hyperlinks. In the first case, the meeting of the centenarian Giannis Lagas with nursery school children during the 28th of October (OHI) Day gave us the opportunity to take an interview/narrative from his daughter about his way of life and how it might have contributed to his longevity. In the second case, we link the “last celebration of Independence Day” by Junior H.S. students with an actual and, at the same time, touching narrative by Kiki Katsafanas about the Junior H.S. (1964-2011) which was forced to close down after 47 years of operation.

Gaps in materials (photos, documents and film clips) can also be noted in the present thematic category. The Committee would welcome materials on the education of Vlahokerasiotes during the 19th and the beginning of the 20th century, especially on the level of elementary schooling. We need black and white photographs from classes and teachers in the old private installations of elementary school and the scholarcheion before 1950. A more systematic history/narrative [with photos if they exist] about teachers, Vlahokerasiotes or not, who taught at the various schools of the village, would be of special interest. Finally, the photos already incorporated in the present unit could also be enriched by film/video clips that compatriots have in their possession.

[1] Our gratitude to Aggeliki Katsafanas, Giannis Zeppos, Dimitra N. Chronis and Costas Katsafanas for their contribution to the documentation of the present introduction. The Coordinator also cross-validated school forms with the biographies of prominent Vlahokerasiotes who had completed basic education in the region.

[3] Until the educational reforms of 1895, the structure of education reflected generally the influence of the King Otto educational system. For a review of the educational forms after the establishment of the neohellenic state and up to 1895, see http://www.pi-schools.gr/progr_spoudon_1899_1999/episkopisi.pdf  (Ανάκτηση: 1/12/2015).

[4] For a brief history of the construction and transfer of the school buildings to the Community of Vlahokerasia (1927-1953) by Nikos Petropoulos, see the relevant hyperlink in the photo caption.  The document comes from the research of Petros I. Sarantakis (about the Arcadian benefactors).