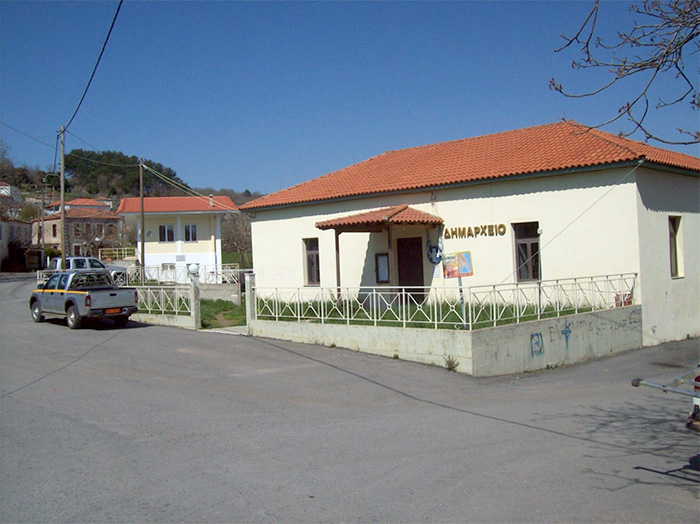 Like all the villages in Greece, Vlahokerasia, has undergone several administrative changes over time. For an overview of the administrative changes during the 19th and 20th Century, the visitor is referred to the brief history of Vlahokerasia, Vlahokerasia: History, Demography and Folklore (in Greek) written by Angelos Bistolas, Elementary School Teacher/former president of the Vlahokerasiotes Association of Attica, and his collaborators. This work also includes a list of the Presidents/Mayors of Vlahokerasia after 1940, as well as a section on the origins of the village’s name (See part II, “Demographic and Administrative Changes”, of the above monograph” under the menu category “History – Traditions”).

Therefore, in the present thematic unit, there will be no repetition of the details regarding the administrative changes over time. However, it is incumbent upon us to explain why the present unit has the title “Community and Municipal Activities”.

Most of the available materials of the present thematic unit concentrate on activities which took place during the 20th century and the early part of the 21st century. The unit starts with a photo from the beginning of the 20th century which shows some of the Village Heads (Koinotarches) of the prefecture of Arcadia, amongst whom there was also one Vlahokerasiotis. Then it continues with materials from Giannis Zeppos, former President of the Community of Vlahokerasia, who has had a rich record of involvement in village activities over the years. In a relevant hyperlink, Giannis recounts the unpleasant experiences of his family during Occupation, the emigration of all the family members (nine members, seven of which were siblings) during the decade of the 1950s as well as his extensive community and ecclesiastical work during the 1960s and afterwards.

The present thematic unit closes with materials on public works, events, and activities of the Community of Vlahokerasia and the Municipality of Skiritida that took place, on a periodic or annual basis, during the period, 1990-2015. More specifically, the photographic materials include snapshots of the construction of the wind (aeolic) park, a meeting at the community center about infrastructure works, the seismograph at Agioi Apostoloi, the construction of a public spring, the annual fair, as well as of the classic Marathon race, horse races and automobile rallies[2].

More specifically, the hyperlinks to the wind park materials include (1) a report of the then Mayor of Skiritida, Constaninos Katsafanas, which describes the ecological and economic benefits for the local community and the country (2) a summary composed by the undersigned describing the main parameters of the wind park (e.g. electric power) accompanied by photos of the construction phases and (3) a video clip of the operating windmills by the undersigned taken from the Agioi Apostoloi heights. The wind park, a vital project for the village, was built on the tops of barren hills, surrounding the village, and takes advantage of the strong winds often raging in the area.

The photo materials of three local marathon races ( the “Koureia”) that took place during the decade 1994-2004 (as a prelude to the 2004 Olympics held in Athens), are hyperlinked with a document and a video-clip from U-tube. The first hyperlink consists of a documented proposal by Dimitris Karaiskos, a member of SEVAS Piraeus (Association of Veteran Athletes of Classic Footraces) submitted to the President of SEVAS Piraeus, Pan. Kanakaris, with a recommendation to hold the “Koureia” in Vlahokerasia[3]. The second hyperlink is a video-clip of long-distance Marathon Giannis Kouros, who was born in Merkovouni Arcadia; it shows him while terminating the Spartathlon and addressing the Spartan spectators about the symbolic meaning of the Battle of Marathon for the current crisis confronting our country.

Despite the considerable amount of materials, the Committee acknowledges there is still room for improvement. We still have gaps in materials (photos, documents, etc.) for the periods 1850-1910 and 1920-1990. Furthermore, we are looking for films/video clips concerning the local Marathon (“Koureia”), the horse races and the automobile rally that was held in Vlahokerasia. We are certain that some of the spectators have immortalized these races with their digital cameras. However, the Committee would welcome whatever supplementary materials related to community-organized activities.

[1] See relevant hyperlink/article by Lefteris A. Sourlas for the significance of Skiritida in antiquity and the “Skiritida Company” who fought at  Thermopylae on the side of Leonidas.

[2] It is noteworthy that the horse- and auto-races were held at fields where our progenitors were cultivating wheat, vineyards and grazing their herds.

[3] The idea for the «Koureia” came from Kostas’ Mesologgi, from Piraeus, former track athlete (member of the National and Armed Forces track teams),  member of SEVAS  Piraeus , and husband of  compatriot Anastasia Mitsopoulos. Together they played a significant role in the promotion and implementation of the idea.