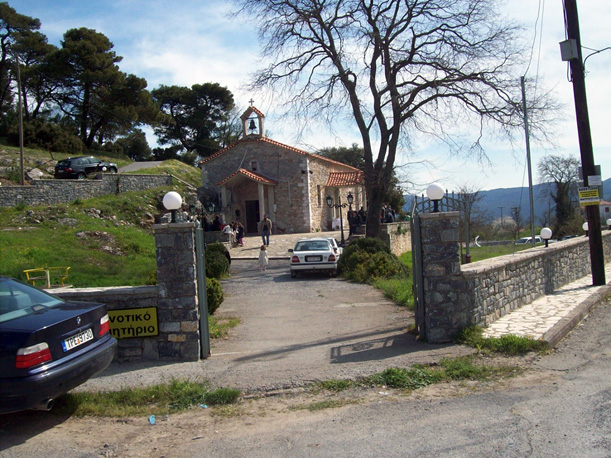 The churches in the village and in the countryside have played a significant role for Vlahokerasiotes, as places of worship, performance of holy sacraments, celebrations and reinforcement of bonds among families, relatives, and friends. Thus, and often with the support of omogeneis (expatriates), Vlahokerasiotes built and renovated the main village church (Church of the Assumption) as well as numerous country churches (St. George, the Holy Apostles, St. Nicholas/St. Theodore, Prophet Ilias, Church of the Virgin Mary, St. Constantine, St. John, St. Athanasios, St. Irene and St. Efthymios). As expected, the most virtual space in the Vlahokerasia Digital Museum (VDM) was allotted to the church in the village – built basically with funds remitted by the Vlahokerasiotes abroad (Pittsburgh).

There take place the Sunday services, most of the sacraments and are celebrated the principal holydays of Orthodoxy (e.g. Christmas, Easter and the Assumption). The building of the Church of the Assumption started at the closing of the 19th century (in about 1895) and was completed in early 1960s. The visitors to VDM will find hyperlinks, which deal with the general history of the church (See the narrative of Giannis Zeppos) and more specifically the history of its construction, subsidization, completion and inauguration. Relevant hyperlinks can also be found in the thematic unit on “Benefactors of Vlahokerasia”. Aside from the issues of ecclesiastical history and infrastructure, the VDM also includes hyperlinks/narratives from Dina and Voula Kontogiannis on Easter customs.

Every country church also has its own history, i.e. when it was built, who the protagonists were and how it was subsidized, wherefore its location, when it was completed and when renovated. Unfortunately, at this phase we do not have the complete history for all the country churches. We have some historical data, based on narratives, for the churches of Prophet Ilias, St. Nicholas/St. Theodore, St. John, and St. Efthymios (See also relevant hyperlinks)[1]. Following a discussion with Giannis Zeppos, who has been occupied with church affairs for several years, we learned that the land-owners in the area had an active role in the location, construction and naming of the country churches. The visitor to our collection has the opportunity to view two brief films (1968), without sound, one that shows Vlahokerasiotes as they are returning from the Prophet Ilias church [with children mounted on decorated mules and the adults walking] and the other as they come out of the Church of the Holy Apostles. In both cases, you may recognize compatriots, who have left us, others who today are at the height of their career, and possibly your relatives or even yourselves.

As we mentioned above, fairs and festivals were organized by the villages during the days designated as days for celebrating and commemorating the respective Saint’s name. The biggest of these takes place in the churchyard or the schoolyard during the day of the Church of the Assumption (15 August) and is organized by the Cultural Association of Vlahokerasia. The festival is accompanied by live music, traditionally baked roasted pork, and dancing (usually folk but also hasapiko, zeibeikiko and modern) and lasts for two days. People come from the surrounding villages, from Athens and other cities of Greece, as well as from abroad (especially when Orthodox Easter falls late).

Although in a smaller scale, festivals and picnics were/are organized during the respective saint’s name day in almost all the village’s country churches by Vlahokerasiotes Associations (Attica or local ones), the local community or upon the initiative of families themselves. The festivals/picnics usually start after the completion of the church service. The Country churches give Vlahokerasiotes and their guests the opportunity for an excursion. The most popular festivals were those that took place during St. Constantine’s day (21 May) or the day of the Prophet Ilias (20 July)[2] and were respectively organized by the former Mayor of Skiritida Contantinos Katsafanas and the Vlahokerasiotes Association of Attica[3]. These were usually accompanied by food, song and folk dances. In the more remote country churches, celebration after the church service is usually a matter of self-organization; the food (regular or meatless) is prepared by the churchgoers themselves. The shrinking of agricultural activities in the vicinity of country churches led to a reduction of church activities.

It would be remiss on our part, if we did not make a reference to the oldest document (1870) in the present thematic category from the archives of the late Christos Tzavellas, which deals with the “exhortations” of Theoklitos A’ (Archbishop of Mantineias and Kynourias) toward Vlahokerasiotes to meet their economic obligations to the church. The document is presented both in the original (multi-accented) and in computer-processed (mono-accented) styles. Aside for its work in promoting collective self-knowledge, we believe that the document contains significant data for comparative religion.

[1] In regard to St. John’s country church, we would like to draw the visitors’ attention to: (1) two hyperlinks/texts that had been published in the “Voice of our Village”:  (a) an article by Aggeliki Kribalis about “St. John, the Saint who Fasts”, with significant information about the history, the immediate environment, the archeology, the architecture and the icons of the country church and (b) a poem by G.  P. Mandros who, after experiencing a mirage, makes a self-commitment (12/2007), (2)  the article by Lefteris Sourlas who, inspired by the centenarian tree at St. John’s,  writes about all the remaining  giant trees in the region and  (3)  the article of Aggeliki Katsafanas  (“The Road to St. John’s  Country Church”) where she recalls to memory the old means of going to the country church and juxtaposes them with the modern means of transportation, while for her the whole milieu of  St. John’s  country church exudes  “simple scenes which  calm the souls of humans”.

[2] Before 1940, during the Prophet Ilias day, a big trade fair was organized in the schoolyard (See hyperlink/narrative of Constantine Mihalopoulos to Kiki Katsafanas).

[3] See a relevant hyperlink, a poem-dedication (“There in the Heights of Agiolia”) by Petros Petropoulos to the “Vlahokerasiotes Attica Association”; the poem had been published in the “Voice of our Village” (9/1997).