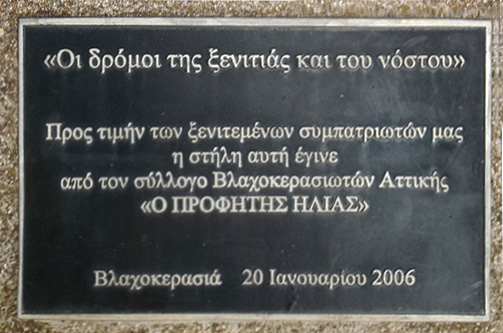 We can distinguish two waves of emigration from Vlahokerasia during the 19th and 20th centuries, the pioneer wave (1880-1920) and the later wave (1950 – 1970). The first wave had as destination the U.S. and especially the state of Pennsylvania and the city of Pittsburgh. Besides the U.S., the newer one also had Australia and Canada as destinations. The later emigrants who went to the States settled mainly in cities where the first emigrants had settled, usually close to their relatives. Those who went to Australia settled mainly in Sidney and those who went to Canada in Montreal. Migration to Western Europe was almost non-existent, except for few compatriots who settled in Germany and Sweden.

The basic reason for emigration, in both waves, was economic. Specifically, the small lots of agricultural land, the bareness of the land, the uncertainty of the annual yield, the hardships of agrarian life, the multi-member families, and the obligations toward unmarried sisters/daughters, in combination with the lag in social, political and industrial development, compelled many young people to take the road to foreign lands. They went to countries which, at that time, provided them with opportunity for occupational progress and for a better life for them, their children and the relatives in the old country. Surpassing the obstacles of the language and the prejudice against the southeastern Europeans, with hard work and many sacrifices, the overwhelming majority of them made it, raised their own families, educated their children, honored their obligations to the families in the village and organized associations for mutual aid, maintenance of their traditions and the development of their “personal country” – their village. Naturally, things were easier for the newer immigrants since the “chain of migration” was in operation and the status of the home country had improved in the eyes of the destination countries following the successes of Greeks in the Albanian front (1940-41).

We start our sojourn in the present thematic unit with a sign-dedication of the “Vlahokerasiotes Association of Attica” to the omogeneis. The sign represents the dispersal of Vlahokerasiotes to the various cities of the U.S., Australia and Canada. We continue with photographs and hyperlinks concerning the ocean-transportation of the pioneer waves of emigration to U.S. and Australia. Activating the relevant hyperlinks, you will learn about the history of the transoceanic ships, the conditions of transportation for emigrants, and about the registration process upon arrival at Ellis Island.

In turn, we focus on the photo materials about Vlahokerasiotes in the United States, starting with the classic book of Spyros Kotakis, “The Greeks in America” (1918), which also includes three Vlahokerasiotes with a brief biographical sketch for each one. Activating these hyperlinks takes us to the prologue of the book and to two narratives about the life of Aristeidis A. Sourlas, one of the pioneer Vlahokerasiotes immigrants with significant community and professional activity, but with an unfortunate ending. We continue with materials (photos and hyperlinks) which refer to both waves of immigrants and their activities (e.g. family photos, weddings, celebrations, gardens, etc.). Especially precious to us are the hyperlinks that take us to the “Statutes of the Vlahokerasiotes Brotherhood” (1916) and to a review of the work of the “Brotherhood”, which is based on an interview of Orestes Velissaris, former President of the “Brotherhood”, taken by Kiki Katsafanas during a visit of the former to Vlahokerasia. We close this sub-category of content on the omogeneis of the U.S. with a unique photo of the cemetery, outside of Pittsburgh, where lies another Vlahokerasia.

Up next, in our digital travelogue, are photos and hyperlinks with a focus on the emigration to Australia. The materials focus on the protagonists in the organization of the “Vlahokerasiotes Association of Australia”, the activities of the Association (e.g. anniversaries, banquets and excursions), on weddings in the community and the business of Foteini Kopitas. For a reading of the “conditions of emigration” to Australia (in English and Greek), the narrative by Giannis Cotsiopoulos to Kiki Katsafanas, where Giannis recounts the history, the activities and the dissolution of the Association and for a look at the philanthropic work of Foteini Kopitas, the visitors to the VDM are invited to activate the relevant hyperlinks.

We round up this thematic unit with photographic materials which concern (1) a concerted action by omogeneis in Australia and the U.S. for the re-publication of the village paper (“The Voice of Vlahokerasia”) and (2) the “meetings-expressions of love” that were organized by the “Vlahokerasiotes Association of Attica” in local taverns to honor the omogeneis from the U.S. and Australia during their visits to the village.

The present thematic category can be further enriched by materials (photos, documents, video-clips), at various phases of immigrant life in the country of residence, especially from towns and cities abroad which are under-represented in the present collection (e.g. Montreal, Chicago, Atlanta, Reading, Melbourne, etc.)[2]. The Committee also welcomes materials which depict situations in Vlahokerasia, either before they emigrated or on their visits to the village. It’s possible they have either inherited these materials from their ancestors or created them themselves during their visits to village.

[1] It is possible that the results underestimate the actual population, especially the descendants of the first wave of emigration and those who had no relationship with the Associations of Vlahokerasiotes abroad.