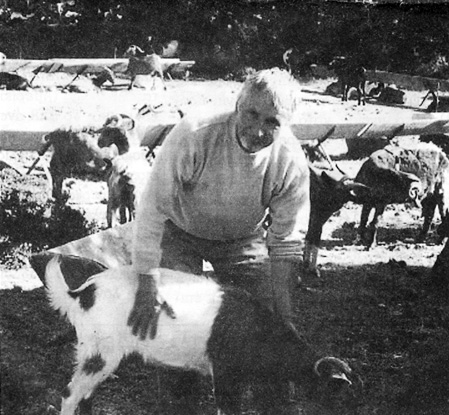 With the term “popular arts”, we are referring to creations which generally deal with traditional subjects and include a broad spectrum of arts such as (a) handicrafts (e.g. embroidery, spinning, weaving, ceramics and the chiseling of spoons, canes and shepherd’s staffs) and (b) the artistic expression (e.g. painting, music and hagiography). Examples of handicraft have been the subject of other thematic units and of the Third Part of the Monograph Vlahokerasia: History, Demography and Folklore by Angelos Bistolas et al. (See menu category “History – Traditions”). The present thematic unit focuses on Vlahokerasiotes,who have occupied themselves with poetic expression, music and hagiography. The creators are farmers, shepherds, teachers, businesspeople, chefs, housewives and students. Amongst them are persons-residents of Greece and omogeneis/immigrants.

Common thread, an inborn talent and a unique charisma to create, without the intercession of special studies though training in some cases may have contributed to further cultivation and broadening of their creative talents. In the present unit, we have incorporated photographs and hyperlinks for 10 Vlahokerasiotes: eight who expressed themselves through poetry, a clarinetist, and a hagiographer.

Among the eight Vlahokerasiotes who occupied themselves with poetic expression, we have two omogeneis who lived in Pittsburgh (U.S.A.) but have left us: Foto Katsafanas, housewife and George K. Kopitas, chef. In their poetry, one can distinguish the intensive longing of omogeneis for their homeland, the past hangouts and their childhood/youth days. Among the rest, residents of the village/Greece, are three who have left us and three who are still with us. The former include Ilias I. Zahos, elementary school teacher, who satirizes his co-villagers and also deals with the reasons why a village spring stopped sprouting water; Petros N. Petropoulos, farmer, whose poems concern the “golden rule” in international relations, the “cursed” foreign lands, and the ills caused by the 1967 dictatorship; and Dimitris Panousopoulos, cultivator-naturist, who occupies himself with his emigrant son’s alienation toward the family/homeland and with the cycle of life and warns the members of modern society with the dangers lurking in old age.[1] The latter, who continue their creative work, are: Lefteris Ap. Sourlas (“Bahanas”), businessman-farmer, who mourns the uprooting (“death”) of a century-old tree by a windstorm and also reminisces about the old farmlands which nurtured the Vlahokerasiotes but have now been deserted; Nikos Houhoulis, farmer, who invests his poetic expression with humor and satire; and Panagiotis Kopitas, a stockbreeder, who laments the premature loss of Panos Stathopoulos, extols the virtues of his “beloved village” and chides the partridge which appears at dawn and brings back to memory some of the happiest moments with places and people who no longer exist. For all the above who have expressed themselves through poetry, the collection has created hyperlinks which refer to their lives and give samples of their work.

The thematic unit closes with two promising young Vlahokerasiotes in the area of the arts: Costas Ch. Giannakas, a hagiographer, a farmer and an amateur inventor and Panagiotis Ch. Bistolas, a senior H.S. student, a clarinet player, and an interpreter of traditional songs (especially the songs of folks living in the plains). The talent of both has been recognized by specialists in their respective fields and ahead of them there lies a bright future as professionals in these fields. Of special interest are two hyperlinks/articles by Kiki Katsafanas for Costas and Panagiotis as well as a video-clip from an appearance of Panagiotis at a special event for the chestnut festival, which took place in Vlahokerasia at the “Pinakio” tavern of Pantelis Mitropoulos, October 2015.

During the collection of materials for the VDM, we realized that the present thematic unit can be further enriched. Both among our compatriots in Greece and omogeneis abroad, there are many more than we have included in the present collection, who have occupied themselves with the popular arts. We call upon our compatriots, wherever they live, to contribute to the further enrichment of the present unit by sending the relevant materials (photo, biographical sketch and samples of his/her poems) to members of the Committee; these materials may concern themselves or others who have left or are still living.

Click  here or on the image above to browse the flipping book.

[1] Dimitris left us suddenly on 12/03/2016 at the age of 78. He had gone to gather wild greens for cooking when he died. See also article on him by Kiki Katsafanas (Economy-Production ― “Fruit-Tree Cultivation and Native Plants”).