The Water Supply of Vlahokerasia 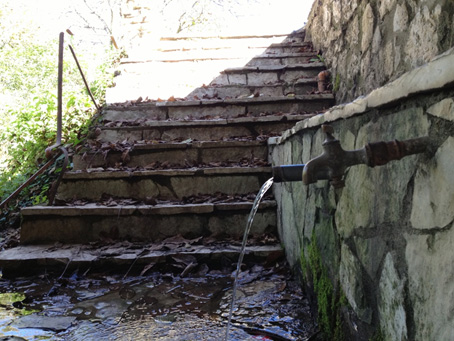 [1]The principal sources of water for the Vlahokerasiotes, before the decade of the 1950s were the private draw-wells either in their yard or in their gardens. Except for the private, there were also public wells spread out at different neighborhoods for use by all villagers (e.g. Madreiko, Sabekeiko, Goneiko, Kouveli, Kopiteiko and the ‘public’ one[2] behind the public school of Vlahokerasia). The wells, whether private or public, usually had a wooden cylinder and were manually-operated; they had two handles on the sides in order to draw larger quantities of water. Following the electrification of the village in the 1960s, water was drawn from the wells by motors and the traditional draw-wells became history. From the wells, Vlahokerasiotes drew the water for drinking, cooking, washing and the watering of gardens and the domestic animals.

Most of the wells, private or public, are still operational, although the water beds have been markedly receding the last period due to a reduction of rain/snowfall and global warming. However, after cesspools by most families, the water from the wells (private or public) is no longer potable and is used only for the watering of gardens. The Vlahokerasiotes often draw water from public wells (not yet dried up) for irrigation purposes. During the summer one observes a convergence of farmers with their tractors in one of the still operational public wells (Sabekeiko), in order to draw water (with their own motor) for their gardens.

An alternative water source were the natural springs near the village. Some of these were built close to the sources (e.g. Chronis, Gero-Mentis, Melissi) while others farther away from their sources (e.g. Goneika, Platani; in the latter case, the water was transported to the spring outlets by pipes. Among these, still operational within the village is the Chronis Spring, which constitutes a source of potable water, continuously since its construction in 1937. It attracts people from the entire village, especially during periods when the central water supply is down because of repairs, reconstruction or drought.

In our days, the Municipality of Skiritida also built stone/cement-walled public springs (e.g. in the town-center, Goneika, Platania Square, St. George and the cemetery) which are connected with the central water supply system. Among these, currently operational are only the ones at the cemetery, St. George church, and the town-center exactly at the point of departure for the Vlahokerasia Trekking Trail.

The first systematic attempts to build a central water supply system for the village date back to the second third term (1951-52) of Sotiris Kotsiopoulos, President of the Community of Vlahokerasia. Water, drawn from the Mentis (Sourlas) ravine, fed a water tank with a capacity of 10 m3 installed close to Kotsiopoulos’ house. This tank supplied water to eight public springs located in neighborhoods and served the needs of households south-east of the village church[3].

The next step (1972) in installing a central water supply was the construction of a pumping-station, during the presidency of Giannis Zeppos, the drawing of water from a catchment in the Valtena River (at Brontovyro), the piping of the water to water tanks near the pumping station (at the Papaphilippou Mill) and the use of motors to pump the water to tanks at a the southern heights of the village, near the crossroads of Valtena/Kollines. For the first time, the central supply network brought water inside the homes of all the Vlahokerasiotes[4]. The central water supply system was upgraded when the catchments were replaced by two dams at Valtena River. The construction of the first dam (with a capacity of 38,000 m3 ) near the Papaphilippou Mill, began in 1993, when President of the Community was Vasilis Christopoulos and was completed when local President was Costas Katsafanas. The second and present dam (with a capacity of about 250,000 m3 ) was built during the period 2007-2009, at St. Athanasios/Vrodovyro) when Constantinos Katsafanas was Mayor of the Municipality of Skiritida (with the seat at Vlahokerasia). The latter, a Geologist by training, was responsible for the technical study – a precondition for the construction of the two dams.

The presentation of digital materials for the present thematic category begins with the springs and the private wells, continues with the traditional carrying of water from the springs and its drawing from the wells, the installation of motors in the wells, the irrigation of gardens and closes with the construction of the central supply system and the Taka Lake – a catchment that also collects water from the ravines of the Agriokerasia Hill (north of the village). The unit is enriched by hyperlinks with documents and film/video clips which among others include (a) an article by Giorgos Pan. Mitropoulos about the springs in our village (b) an historical-folkloric article by the Chronis Spring by Stathis N. Chronis where he struggles to separate myth from reality (c) a narrative by Dimitrios Ch. Michalopoulos (“Gonis”) about the Goneiki spring (d) a brief note by Constantinos Katsafanas accompanied by photos about the first local supply network built during the presidency of Sotiris Kotsiopoulos (e) two articles by Ismini Mandros and Dimitris Michalopoulos on a “forgotten” natural spring at Ramou and (5) three film/video clips, by the undersigned, which depict the traditional carrying of water (1968) from Chronis Spring, the manual drawing of water from a private well (1975), and the running water from the Chronis Spring (2013).

The Committee welcomes new materials (photos, documents, narratives, histories and film/video clips) which will fill the gaps of the present thematic unit and will enrich the Vlahokerasia Digital Museum.

[1] Our gratitude to the contractor and former Municipal Councilor Constantinos Georgaklis and the former Mayor of Skiritida/Vice-Mayor for Development of  the Municipality of Tripolis, Constantinos Katsafanas, for their invaluable contribution in the preparation of this introduction.

[2] All the wells were public, but in the vernacular, “public” meant this particular well, possibly because of its proximity to the public school. In front of the school, there used to be another public well, which has been filled, apparently for reasons of safety.

[3] There were also other community attempts (e.g. at the ravine above the Chronis Spring) to cover the needs of households in other neighborhoods, which, in the end, were fruitless.

[4] Thus, the waters of Valtena River were diverted, from the earthen canals that once carried water to the flourmills, watermills and the irrigated fields of Vlahokerasiotes to water tanks that supplied water to their households.