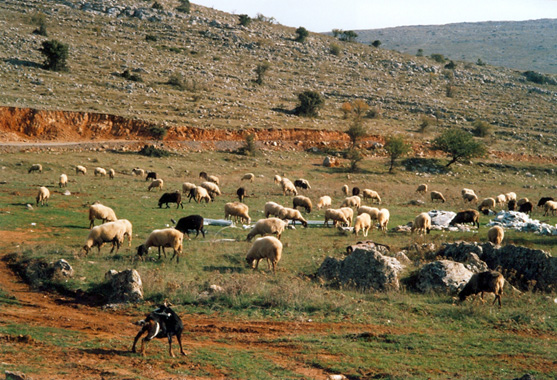 Livestock raising has as an object the feeding, the reproduction and the exploitation of animals and their products for the satisfaction of human needs (food, clothing, transportation etc.)[1]. The present thematic category covers both the free-range animals (e.g. goats, sheep, cows etc.) and the domesticated ones (e.g. pigs, maltese goats, beasts of burden etc.). In the past (about 60 years ago), almost all the Vlahokerasiotes had herds of goats and/or sheep as well as domesticated animals. Today, the domesticated animals have mostly become history and the number of compatriots with herds (goats, sheep, cattle) is not more than 10 in a total of about 180-200 families.

It is noteworthy that some of our stockbreeders have large herds[2], apparently taking advantage of the EU incentives for regional development and the increased demand for domestic animal products. The present thematic unit focuses on goat and sheep breeding, in the past and the present, for practical reasons (availability of materials) and because a satisfactory number of Vlahokerasiotes continue to occupy themselves with stock breeding.

We begin the present unit with the grazing and/or watering of goats, sheep, cattle[3], and horses, continue with the milking and the shearing of goats and sheep, the spinning of wool and weaving, and close the cycle with the slaughtering of animals and the grilling of lambs during Easter[4]. Some of the photographic materials are accompanied by hyperlinks, which consist of articles, narratives and film/video clips, with and without sound, and are noteworthy. The article of Kiki Katsafanas is based on an interview she took from stockbreeder Athanasia Dimitrakopoulos and deals with cattle-raising and the marketing of the relevant by-products. and Among the narratives we include those of: (1) H.S. teacher Panagiotis Ch. Petropoulos, which deals with the awarding of a prize by the International Exhibit of Thessaloniki (~1926) to his grandfather for the production of the best butter using traditional methods (2) a local couple to Maria Kopitas, which deals with the recipes for making of cheese, butter, “skimmed-milk cheese” (myzithra) and yogurt (3) stockbreeder Panagiotis Dimitrakopoulos, to his student-son for the shearing of goats and sheep and (4) Stavroula (Voula) Kontogiannis, to Kiki Katsafanas for the “group-work nights” (nychteria) which, among others, also included spinning by groups of women.

Among the hyperlinks with films and video clips, the Committee included materials by the undersigned (1968), Angelike Kontogiannis (Contis) (2001), Kiki Katasfanas (2005), Vasiliki Bistolas (2015) and Constantinos Ganas (2016). For the production of these, both previous generation cameras and new digital technologies were used. These materials focus on the grazing of herds (goats and sheep) and maltese [domesticated] goats, the shepherding of herds, the watering of herds, and the milking of cows, as well as the shearing of sheep. One of these (that of C. Ganas) focuses on the horse breeding, their grazing and watering. Another one (that of Kiki Katsafanas) involves a theatrical performance, “the Shephers”, by the Junior H. S. of Vlahokerasia students. In two of the video-clips, we hear two of our compatriots: (1) the oldest stockbreeder of our village, Stamatis Mitsios (“Biliouras”) to play the flute and sing a folk song about the cursed “foreign lands” (xenitia) and (2) the teacher, Costantintos Krekouzos, to sing together with Stamatis another folk song, “Now the Birds, Now the Nightingales”. The traditional hymeneal song was sung the first night of the wedding by the invited guests, who continued to sing, after the newlyweds had retreated to the bedroom.

Via the digital cruising in this thematic unit, and especially the hyperlinks (narratives and film), we hope to make more well-known the older forms of collective work with regard to the processing of animal hair (e.g the rotation in shearing, informal groups of women in house entrances, the night-work get-togethers of women, etc.), the traditional forms of making dairy products, and the traditional practices of feeding, watering and milking goats and sheep, as well as the changes in the shearing practices.

We have already specified an important gap – mating and reproduction – In the present unit (See footnote 4). The Committee welcomes materials (photos, films, narratives) on all aspects of this unit, as long as they pertain to the village, and contribute to the further enrichment of the collection. The cycles of grain cultivation and stockbreeding close with the thematic unit on «Our Pastas, Breads and Cakes” under the menu category “History – Tradition”.

[1] We refrain from using the word “tsopanis” (shepherd) because it is usually associated with negative stereotypes (e.g. illiteracy, rudeness, etc.) which do not reflect current reality. The modern stock raisers must be literate and updated to be able to cope with the domestic and European Community demands of their occupation.

[2] The stockbreeders with the large herds (who also employed other farm workers) were called “Tseligges”.

[3] Cattle raising, as an occupation, constitutes an exception among our compatriots. The exception is Athanasia (Soula) Dimitrokopoulos, who raises cattle for their meat (See relevant photographs and a hyperlink –article by Kiki Katsafanas).

[4] Among others, we lack materials (photos, film, documents, narratives, etc.) relating to the mating and reproduction of local stock, and we call upon our compatriots who have such materials at their disposal to send them to us. We add that such materials could also be used in classes for family planning.