Our Vineyards and the Cycle of Wine-Making 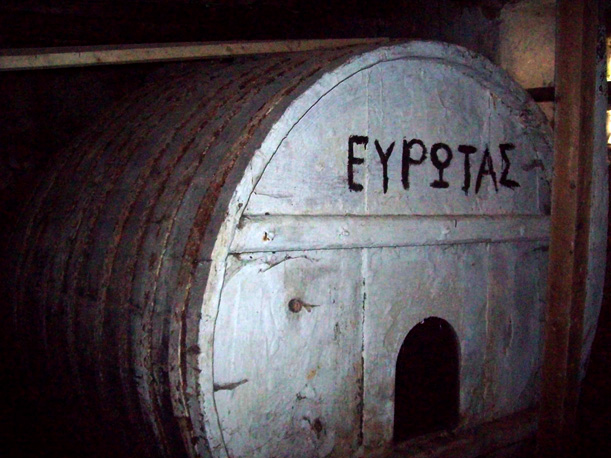 [1]Perhaps the present thematic unit should have another title, like the “Vineyards of our Parents and Grandparents”. Almost all the vineyards that were once cultivated by the Vlahokerasiotes in the vicinity of the village[2]have been uprooted. In the worst scenario, the once cultivated lands have been abandoned and taken over by other vegetation, bushes and weeds. In the more optimistic scenario, which we think is the most valid; the younger generations (those born between 1935 and 1960) have planted chestnut and walnut trees, for family consumption and commercial purposes.

In the plots where first were the vineyards, one can still find cherry trees (early and late varieties) though many cherry trees have been cut down because of their comparative sensitivity to weather conditions and their place have taken chestnut[3] and walnut trees. Therefore, the present thematic unit will essentially be a cruising through the recent past. A remarkable exception is the vineyard of compatriot Vassilis Apostolopoulos (“Karagiannis’) in Vromovrysi. There Vasilis cultivates about 10 varieties of grapes, in addition to chestnut and cherry trees as well as a garden. These have been captured by the camera lens and the visitor will see them in the respective thematic units.

The vineyard areas mentioned in footnote 2 were, in the not so distant past, wild forests and bushes, which were cleared and plowed by our grandfathers and fathers in order to plant the vineyards. Following the planting, the young vineyards had to be watered and cultivated for 2-3 years before they would have grapes. In order to continue to bear grapes, the vineyards needed annual trimming, fertilizing, hoeing (making hills around the roots), turning (leveling) the soil after the vine had sprouted, cutting off the barren offshoots[4], and spraying with pesticides two or three times per season after foliage. The grapes attained a variegated color (e.g. half green and half-red for red grapes) late August and the harvest took place during late September. The schools closed down for 3-4 days so that students could also take part in the grape harvest. During the period of the harvest, there circulated the saying: “reaping wheat fields, harvesting vineyards and going to war” (“theros, trygos, polemos”)[5] to express the extensive mobilization for the summer harvests. There followed the transport of the grapes in large straw-baskets loaded on mules/donkeys to the family’s linos (patitiri)[6]. The cycle of wine-making closed usually with the pressing of the grapes, the production of must (moustos)[7], the fermentation of must to make the wine[8] and its storage in wine barrels located in the basement of the house. For most farmers, the cycle closed with the production of wine. For some, the cycle closed with the production of tsipouro (raki) using the remains of the pressed grapes – a process involving boiling these remains, cooling the vapor and channeling the liquid results (raki) to a vessel –a process that lasts about 20 days. The wine was produced usually for family consumption. However, a small number of Vlahokerasiotes sold a part of its wine production, putting it in animal-skin bags (askia) and transporting it with mules/donkeys to stores (taverns, cafes etc) in the wider region.

The present thematic unit does not cover all the stages of wine production. We have at our disposal materials (photos and hyperlinks) for the hoeing of vineyards, the spraying with pesticides, the harvesting, the transporting and the pressing of grapes, as well as the storage of wine in barrels and the production of raki (tsipouro). Each of these stages is accompanied, when possible, by hyperlinks consisting of narratives and films/video clips, which, to some extent, fill the gaps in photo materials. For the hoeing, the interview/narrative of Constanina Karkalas to Kiki Katsafanas informs us as regards to: (1) the rich variety of grapes evoking at the same time our taste memories (2) the selling of the local wine and (3) the types of exchange economy at that time which are now reviving in some areas of the country because of the economic crisis. The spraying of the vineyard is accompanied by a soundless film (1968) which depicts the farmer Petros Petropoulos spraying his vineyard and wearing a protective mask bought for him by his omogenis son who at that time lived in the U.S. For the traditioinal loading, transporting and pressing of grapes, lacking materials from local sources, we borrowed photos and/or video clip from other regions of the country using the internet. More specifically, for the loading and transporting of the grapes in woven straw-baskets and by donkeys or mules, we borrowed photographic materials and relevant information from Spata, Attica and Valyra Messinia. For the foot-pressing of grapes, we link with a video on Aigina, which shows exactly how this was done in the past by the farmers in our village, while at the same time provides us with important information with regard to fermentation and the storage of wine. This phase is completed with a video-clip by John K. Bistolas showing the modern way of wine-making by a factory in Tripolis. The storage and preservation of wine is hyperlinked with (1) a brief history of one of the largest wine-barrels in the country (that of Aristideis Sourlas/”Kotopoulis”) which was written by the granddaughter of Constantinos Christakis (brother-in-law of “Kotopoulis”), Ioulia Spiliopoulos (agronomist), in cooperation with her husband, Leandros (Physicist), who also calculated the exact volume and the approximate storage capacity (in kilos) of the historical barrel and (2) a 2001 video-clip by Angelike Kontogiannis (Contis) showing the wife of Kotopoulis, Alexandra, to reminisce about the good days and to give us a tour through the old store on the ground level and the basement with the barrels which constitute part of our cultural heritage and deserve continuous maintenance.

Following a comparison of the materials in the collection with the above-mentioned cycle of wine-making, we believe that the gaps have become apparent, especially with regard to trimming. Moreover, we have borrowed several relevant materials from other regions of the country (e.g. the carrying, the loading, the transport and the traditional pressing of the grapes). We would prefer all the materials (photos, films, video clips, documents, narratives, etc.) to come from our village and region. We call upon compatriots who have such materials in their archives to send them to us.

[1] Our gratitude to Giannis Zeppos, Ilias  Petropoulos, Christos Margetis, Nikos K. Petropoulos and Evangelos Mitropoulos for their contribution to the present introduction.

[3] However, as we refer in another thematic unit (“Fruit-tree Cultivation and Native Plants”), many chestnut trees have been stricken by an incurable epidemic.

[4] The cutting off of the sterile offshoots is done in order to strengthen the fertile ones (See also G. Babiniotis for “sterfologima” (Center for Lexicology, Athens, 2008).

[5] Actually, this was widely used (See www.laografia-spata.gr/trygos-sto-xorio/). The English equivalent according to the D. N. Stravropoulos, Oxford Greek-English Learner’s Dictionary (1987) is ““time and tide wait for no man”).

[6] A “closed space” where farmers emptied and stored the grapes until the process of grape-pressing with their feet began.

[7] The grape juice before the process of fermentation. From the must, the families made various sweet by-products, like petimezi (grape juice syrup) moustalevria (must with flour) and moustokouloura (must cookies from petimezi) –especially loved by children.

[8] The «gradometer” was used to measure the density of the must or the degree of its appropriateness for wine. Not all the Vlahokerasiotes had such an instrument in their possession. They either borrowed it from those in the village who had one or used a more traditional method to determine appropriateness. The latter involved the sinking of a fresh, uncooked egg in a container (kazani) with must. If the egg stayed or came to the surface, then this must was appropriate for wine-making. The very dense must needed water for thinning and the very thin, melted sugar for thickening.