Our Irrigated Farmlands at the Source of the Evrotas River 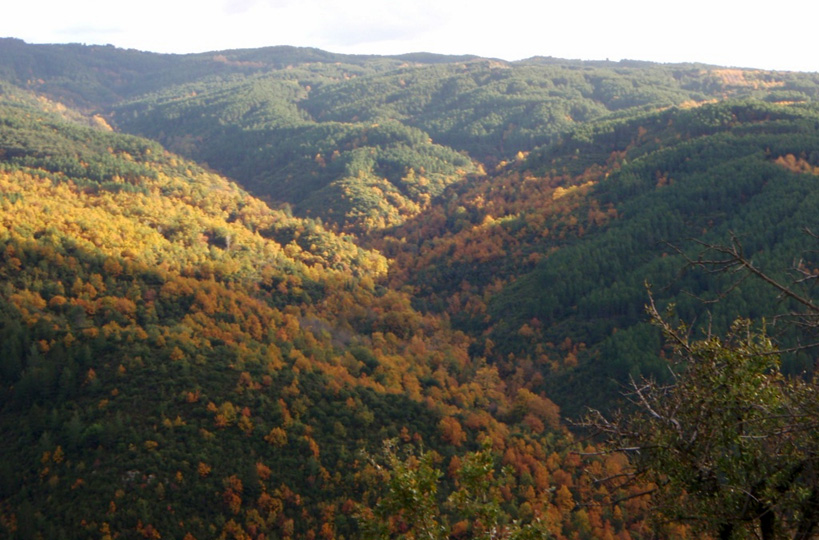 On the Valtena banks, one also found almost all the flour- and water-mills of Vlahokerasia, which today are ruins (see other thematic units of the VDM). In addition, several families of Vlahokerasiotes had farmlands along the Vathyrema stream. To get to Vathyrema, the farmers had to cross the Valtena River, at the Tzaveleikoi Mills. In both cases (Valtena and Vathyrema farmlands), almost all the farmlands were located on their northern banks, apparently because of their proximity from the village but also in order to avoid swelling rivers and streams. The few farmlands, which are located on the opposite (south) bank of Valtena and of Vathyrema (e.g. “Psili Rachi”, “Agia Kyriaki”, “Amonitsa”, “Asprolithari”, “Kakarinou”) are largely dry farmlands where they usually cultivated wheat that does not require irrigation.

To form at least a general picture of the distribution of the irrigated farmlands, we communicated by phone, with villagers, who had farmlands in the above areas, and specifically, with Giannis Zeppos, Stamatis Mitsios, Dimitra Kopitas (Lagas), Ilias Petropoulos and Christos Giannakas. We asked them to give us the names of the owners who cultivated these farmlands. Giannis Zeppos (92 today) gave us information for the landowners (names, family names and even nicknames) for the farmland owners along the Valtena River, from the Vrodovyro place to Moursia. We were amazed by his encyclopedic knowledge of places and farmland owners – a live land registry! Dimitra Kopitas and her husband gave us information about the farm owners at Vathyrema, Ilias Petropoulos for those at Blantoi, Stamatis Mitsios for those at Liaga and Christos Giannakas for those at Propanti (Lagada). In Table 1, we present the data for places with at least 10 farmlands. It is necessary to keep in mind that there are some duplications (10-20%), since some landowners had farms in more than one area.

Although most of the irrigated farmlands are in Valtena, our collection uses materials mainly from Vathyrema. For Valtena, we located an informative and simultaneously nostalgic article by our compatriot Ismini Mandros (Valtena: Our River) which had been published in the “Voice of the Village” (No. 56, March 1998). In regard to Vathyrema, two film clips (without sound) shot in 1968 by the undersigned, one which shows the traditional irrigation and the other the transporting by mules of fodder (branches from trees and bushes) for the domestic goats (maltezes), deal with common activities irrespective of the location of the farmlands and will revive memories of past times. Nonetheless, the Committee continues its search for materials involving Valtena and the other locations. We are confident that our compatriots, wherever they live, have at their disposal materials depicting the irrigated farmlands of their parents or their grandparents. We urge them to search their photo archives and send us any relevant materials in order for us to further enrich the present thematic unit.

The products from the irrigated farms included mainly potatoes, corn, tomatoes, green beans, and other garden vegetables. In addition, the land was also hospitable to fruit-trees such as apple, fig, pear, peach, and walnut trees, as well as grapevines. In few low-lying areas, Vlahokerasiotes farmers also cultivated olive trees (e.g. Kalamakia, Moursia, Liaga, Propanti). The products from these farmlands (grain, vegetables and fruit) were produced mainly for the annual consumption needs of the families. In case of surplus, they marketed them (especially apples). Aside from the cultivated products, the irrigated farms were also hospitable to various native plants such as oregano and blackberries, which usually grew on the slopes between plots.

To irrigate their farmlands, the farmers relied on a network of hand-dug canals (secondary canals, main canals and canals for mills). Each main canal had its own source-pond along the path of the Valtena River and the Vathyrema stream. The secondary canals emptied into the main canals. The mill canals fed the flour- and water-mills (which constitute an object of other thematic units) along the Valtena River, while at the same time they provided water for farmlands. For the Vathyrema, the farm fields were irrigated by four simple canals, in view of the fact that there were no mills along the stream given the greater distance from the village and the reduced water flow in relation to Valtena River. Every canal, whether in Valtena or Vathyrema, provided irrigation water for the needs of 5-10 farm owners, and the turns were determined following oral agreements among the cultivators, taking also into account the area of their farm plots. The distribution of water sometimes provoked minor quarrels among them

Before the mid-1960s, the farmers went to their irrigated fields, with the beasts of burden (usually mules and donkeys), either “horseback” or on foot, following the narrow winding dirt paths while descending to the Valtena River. The trip lasted from one-half an hour for the closer to the village Vatena Mills and farm fields and from one to one and one-half hours for the more remote ones (e.g. Vathyrema, Melissi, Liaga and Propanti). The return trip lasted about one-half hour more because it was uphill and the mules/donkeys were usually loaded. For some farm fields (like those in Vathyrema), the farmers had to cover double downhills and uphills, as they had to cross the Valtena river to go and return from their farm fields. In the decade of the 1960s, the community authorities opened up dirt roads accessible to vehicles (tractors, farm-trucks, jeeps). These vehicles gradually replaced the beasts of burden for farm tasks (e.g. plowing) and transportation of products. Naturally, most of the farmers were not able to acquire a tractor, and had to rent one, along with its driver, from other villagers.

Despite the appearance of farm vehicles, following the “uprooting” of the new generation and the migration within the country and abroad as well as the aging of the village population, the farm fields were gradually abandoned. When we asked the compatriots who gave us the information about the landowners to give us an estimate as to how many of the above farmlands were still being cultivated, their unanimous reply was “almost none”. The aging compatriots who are still cultivating their parents’ fields can be counted in the fingers of one’s hand. For most of them, the cultivation of their gardens near the village suffices. The farmlands that were once buzzing with life are now deserted; they have been overwhelmed by vegetation (acacias, bushes, etc.) and need clearing by young people for a restart. Even the foxes have become a rare species and have been replaced by wild boars. The magpies continue crowing, the blackbirds and the nightingales in the gorges persist in their melodious singing, but there is no audience of farmers to enjoy them.

[1] Giannis Zeppos also reported a number of other farmlands that were abandoned a long time ago; these were not included in the Table.

[2] In the place where the Vathyrema stream meets the Valtena river. Most of the farmlands in Blantoi were irrigated by the Valtena River. For the visitor’s information, Ilias Chronis has included a chapter on Blantoi in his last book (The Time when I was a Villager, 1910-1925, Athens 2013 pp. 49-70)