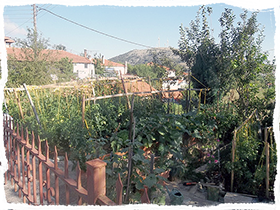 In the preceding thematic units, we made a reference to the employment of Vlahokerasiotes, who live in the village and in various sectors of economic activity (e.g. farming, stockbreeding, businesses etc.). Aside from their narrow occupational interests, the residents of a mainly agricultural region usually get engaged in many other activities, in order to secure additional resources for the family, to broaden their interests, to test their skills, to reinforce local customs, to develop bonds of friendship or simply to enjoy themselves. The present thematic unit concentrates on these “other activities” which meet one or more of the above needs.

Gardening has been a common occupation of most, if not all Vlahokerasiotes, because it supplies the family with fresh greens, etc. produced by themselves. The collection includes photographs of various gardens in the village, that are cultivated either by the permanent residents of the village, by compatriots, who live in a nearby town (e.g. Tripolis) or by immigrants, who live in the village. The home garden greens are supplemented by the gathering of wild greens native to the region (e.g. farmakoulithres, kafkalithres, zohoudia, mitsithroules, ladakia, lapata, meronia, grantzes). The gathering of wild greens is usually done from October to April (they need rains) and cover the immediate needs of families and village taverns.

Another important occupation is the hunt. In past times, almost all the Vlahokerasiotes, who migrated to their winter settlement, for the sake of their herds and to harvest the olive groves, also took part in hunting of wild rabbits, birds (e.g. thrushes) and gathering of snails –the latter after the sun came out following rainfall. Perhaps, it’s not so strange that in the decade of the 1950s, an Australian omogenis from the village indulges in the hunting of wild rabbits (See unit on “Activities of Omogeneis). Nowdays, most of the Vlahokerasiotes, who continue to go to the “winter settlement” occupy themselves almost exclusively with the herds and/or the harvesting of olives.[1]  Definitely, there have been some isolated cases where Vlahokerasiotes have also occupied themselves with the trapping of thrushes (See video hyperlink). What has become especially popular nowadays is boar hunting[2] – a sport that attracts both Vlahokerasiotes and hunters from other areas. For the demands of wild-boar hunting, the reinforcement of teamwork among the hunters and the methods of cooking wild boar, see the hyperlink/interview taken by Maria Kopitas from a local group of wild-boar hunters.

The chickens’ coop (kotetsi) was from time immemorial an integral part of the farmer’s domicile since poultry and its by-products have played a significant role in the family’s daily diet, the preparation of pastas and the Easter customs (See relevant hyperlink). The reproduction of chicks was done by the farmers themselves, using broody-hens whose eggs had been fertilized by the roosters. For the lack of a rooster, farmers borrowed fertilized eggs from neighbors with roosters. Incubation lasted about three weeks. During the incubation period women looked at the stars and re-iterated: “Five ka, ka, ka [for hens] and one Ko Ko Ko [for roosters], as many chicks as stars”. Nowadays, it is doubtful if half of the families, who remain in the village, have chicken coops. This is due mainly to the changes in the way of life nowadays which have influenced rural life, as well as to alternative technologies for poultry production. The overwhelming number of those who have chicken coops buy their chicks, bypassing the incubation phase. As a result, the role of the rooster has undergone changes, and from a fertilizer [and an alarm clock for farmers] it has been degraded simply to the role of the coop’s guard. The few poultry producers left, raise poultry for their consumption and/or sharing with relatives in towns and cities. Notably, the meat and the eggs from free-range chickens are considered of higher quality than those of poultry farms –products of mass and mechanized feeding and reproduction.

A farmer, except for the demands of various types of cultivation, needs to have many more skills. Among others, to be able to cut down [fell] trees, to do various construction and carpentry tasks, as well as to find ways to mitigate the harshness of daily life for the family. Thus, most of them cut down trees with axes or manual saws to secure the firewood, which was used for the chimneys, stoves and coal ovens they had built themselves. The coal was marketed in nearby villages, towns and cities. They also made brooms from heather bushes, canes from holm-oak trees and ladles (large spoons) from arbutus trees. Most farmers also knew how to mix cement, sand and lime in order to make repairs and minor structures in the vicinity of their properties (e.g. terraces, well mouths, ovens in their yards for baking, ovens for making coal). Some of them supplemented their income working on construction work, while all the active males took part, without payment, on public construction projects, when called upon by the local authorities. The photographic materials we have in this sub-category are restricted to the preparation of cement (see hyperlink, 1968), wood-cutting and the making of brooms from heather bushes (See hyperlink/film clip of 1968 for the preparation of cement). With the electrification of the villages (1960s), the mass production of products, the central heating of houses, the spread of construction companies, and the aging of the population, the special farmer skills are more and more becoming a practice of the past.

We round up this thematic unit with materials on hobbies, games and recreation for kids, young people and adults; these were associated either with holydays or constituted part of their daily routine. Some of these (e.g. backgammon) are also covered in other thematic units (e.g. activities of associations and businesses in Vlahokerasia). A larger number of traditional games played by children (e.g. The «Prisoner’s base”, the “long donkey”, the “marbles” etc.) are described in Part III of the monograph, Vlahokerasia: History, Demography and Folklore, by Angelos Bistolas et. al. (See “History –Traditions”). The present sub-unit includes photographic materials on card games, backgammon, “the long donkey”, sports, walks and masquerade events (before lent starts) from the decades of the 1920s and 1950s/1960s as well as on the “horse farm” of Christos Stratigopoulos. The materials for athletics’ (e.g. soccer) and the “horse farm” are accompanied by relevant hyperlinks: the first with a narrative about the multi-talented Thanasis Mandros by Maria Kopitas and the second with a reportage by a Junior H.S. student about the significance of the horse in history, agriculture, recreation and as an alternative for tourism in Vlahokerasia[3].

Without doubt, the present thematic unit can be further enriched by new materials (photos, documents, films, video clips) regarding the activities of compatriots beyond their narrow occupational concerns. Of special interest to us would be materials on children’s and young peoples’ games in the past and any other activities of Vlahokerasiotes, which constitute the object of the present thematic unit (e.g. traditional coal production, children’s games, adult hobbies, gardening etc. ). We invite our compatriots, wherever they live, to make available to us such materials and to further enrich the collection. We stress that the older these materials are, the more valuable they are for our digital collection.

[1] Some olive-tree cultivators maintain that the reduction in the population of thrushes is due to the use of insecticides.

[2] During the last decade, there has been a significant increase in the population of wild boars and hunters.

[3] We note that other compatriots in the village (e.g. Panagiotis Ganas, Stavros Ganas and Constantinos Sotos) also have had horses.