...and other Occupations in Vlahokerasia[1] 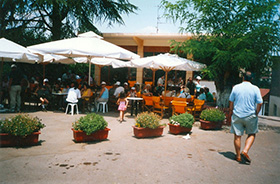 However, following various trends such as urbanization and migration in the 1950-1960 decades, the stripping of the countryside of its youth, the shrinking of the population, the industrialization of the adjacent cities, the progress in transportation, and the shifting of manufacturing and the market from the villages to the cities, the intensity of agricultural production and stockbreeding decreased, and many of the above occupations (crafts/trades) became history. The remaining farmers occupy themselves with fruit-tree cultivation and a small number of them, with stockbreeding. The saddle-makers, the shoemakers, the horse/mule/donkey shoemakers, the millers, and the utensil tinkerers no longer had a reason for existence as craftsmen. Today, the businesses are restricted to two taverns, a refreshments bar, a bakery, a supermarket and a pharmacy. A small number of the residents (5-6) are technicians (electricians, plumbers, etc.) who serve the Skiritida area, while the electricians are also called to repair televisions. An almost equal number of Vlahokerasiotes (4-5) are small-scale contractors, who undertake various house-construction jobs (e.g. throw concrete, build roofs and floors etc.). A significant number of Vlahokerasiotes (20-25) work in near-by towns/cities of the Arcadia prefecture (Tripolis, Megalopolis, Kerasitsa) in factories[2], businesses or banks as workers, employees, owners of business but also as managers, and commute to the village. Finally, a smaller number (about 10), who are mainly Vlahokerasiotes, work in local government (Municipal Department of Skiritida, Center for Citizen Services), the Ministry of Education, the Regional Medical Office of Vlahokerasia (an M.D. and a nurse) and the church (the priest, the chanter and the cleaning woman)[3].

We start the present thematic unit with materials and hyperlinks on the Vlahokerasia cooperatives. According to available information, the first cooperative established in Vlahokerasia was the “The Winemaking Cooperative of Vlahokerasia” – a fact that attests the value that vineyard cultivation had for the farmers in the past. The relevant hyperlink includes a document from the personal archives of George V. Stasinos, with an excerpt from the charter and the signatures of the 80 founding members. The relevant article was first published in the “Voice of our Village” (No. 69, 6/2001). The other hyperlinks pertain to the “Agricultural and Credit Cooperative of Vlahokerasia” that was established later[4] and include (1) a narrative from Nikos Houhoulis to Maria Kopitas which concentrates on the activities of the cooperative after 1964 and (2) an interview of Vaggelis Mitropoulos, the former President of the “Agricultural Cooperative of Vlahokerasia” (A.C.V.), by Kiki Katsafanas which focuses on the merging of A.C.V. with the “Farmers and Stockbreeders Cooperative of Arcadia – The Union” and points to the advantages of economies of scale. This subcategory closes with a hyperlink/notice by the then President of the community, Giannis Zeppos; the notice informs the farmers and the stockbreeders of the visit to the village by a veterinarian and invites them to bring their sick animals (including the domesticated) for examination.

We continue with materials (photos and four hyperlinks) on village grocery stores which we present chronologically, from the oldest to the newest supermarkets (Giannelis, Trakas, Bahanas, Kotopoulis, Tsoulamanis and Anagnou)[5]. Activating the four hyperlinks you will see: (1) an original price catalogue of Lefteris A. Sourlas’ (“Bahanas’”) store (2) an anonymous compatriot (“K.N.”) to have flashbacks of scenes in stores that no longer exist (3) a biography of the storeowner Aristeidis Sourlas (‘Kotopoulis”) that also includes a scientific calculation of the “volume” of the historical wine barrel “Evrotas” and (4) a video clip of Angelike Kontogiannis (Contis) where “Kotopoulis’” wife, Alexandra, recollects the good old times as the camera takes us through the old store on the ground floor and the wine barrels in the basement. The subcategory closes with the presentation of Anagnou’s modern supermarket (formerly the supermarket of “Tsoulamanis”) and a hyperlink with the history of the supermarket together with relevant photos[6].

In turn, we present photographic materials and one hyperlink on the bus transportation between Vlahokerasia and Tripolis in the 1950s. The buses usually departed from the coffee houses and the grocery stores along the main street of the village. Activating the relevant hyperlink, the visitor will read excerpts from a narrative by Anna Iakovou and will learn about the role played by the bus called “Tagarou” (carrying “hand-woven bags” with food supplies), before the advent of the modern buses with the baggage space beneath the passengers’ cabin.

The cruising continues with materials concerning the cafes/refreshment bars and taverns of the village (Vaggelis Mandros’, Chistos Mandros’, Maria Bistolas’, Lakis Mitropoulos’ and Spyros Petrou’s)[7]. The subcategory “cafes” is accompanied by a/n hyperlink/article by Kiki Katsafanas about the Christos and Antonia Mandros café, “The Dew”, which closed down after 46 years of operation. To honor Christos and Antonia for their long-term services to the community a farewell party was organized upon the initiative of twin-sisters, Christina and Ioanna Mandros,

Next, our collection focuses on the craftsmen, involved in the processing of materials and foods (blacksmiths, tailors, carpenters, butchers and bakery owners). As we have already mentioned, most of these occupations have become history. Of special significance in the present subcategory are six hyperlinks. The first two accompany the materials of blacksmith Georgios Mentis (“Kalfas”) and consist of (a) an account by his son Constantinos about the shop and the life of his father accompanied by photographs of a metallic plough and (b) photos of the blacksmith shop “Kalo Amoni” (“The Good Anvil”) from the Folklore Museum of Tegea. The third hyperlink accompanies the materials on Vasilis G. Apostolopoulos, (“Karagiannis”) a carpenter, and consists of his original (1933) license for exercising the occupation. The fourth, accompanies the materials on the tailor, Vasillis G. Stasinos, and includes a brief biographical note by his grandson and a sample of photos from his work. The fifth, involves an article/portrait by Anna Martinou (daughter-in-law) of shoemaker Epaminontas Bistolas and his shop[8]. In the last hyperlink of the sub-unit, K.N. recalls scenes of long-gone customers and passersby as she observes an “on sale” sign on the walls of a building which once housed the wine and butcher shop of N. F. Konstantopoulos, “the Ftochomana” (“Mother of the Poor”).

We round up the present unit with materials for the kiosks, beekeeping, the motels/hotels, the public services and the pharmacy. For the kiosks we only have photos of operators (George Mandros’, Theofanis Bistolas’, and Dimitra Christakis’. Regarding apiculture (beekeeping) the collection includes photos and hyperlinks (articles and narratives) involving the cultivation, the processing and the marketing of honey. For the traditional guest house of Giannis Bistolas and the hotel of Nadia Iliopoulos, the collection features both photos and hyperlinks with brief biographies of the owners and historical accounts regarding the two businesses. For the employed in the public services (rural constables, village constables, and medical center), the collection includes three relevant hyperlinks: (a) two pertaining to the village constable Giannis D. Chronis with a brief biography and page from his diary where he had recorded the imminent invasion of the Germans in Greece (1941) and (b) one for the Regional Medical Center of Vlahokerasia with materials on the benefactors and useful information for access to the Center.

We believe, it has become obvious, that we still have gaps in the unit on past businesses and occupations of Vlahokerasiotes (See footnote 5), as well as for the Agricultural Credit Cooperative of Vlahokerasia and the public –health services (village constables, post office, telegraph/telephone services, the rural medical offices and dental services[9]. Compatriots, wherever they live, are invited to send us materials (photos, documents, narratives) that would enrich the collection.

[1] Our gratitude to Lefteris A. Sourlas (retired businessman) and Dimitra Chronis (Secretary of the Skiritida Municipal Department) for their contribution to this introduction.

[2] The Public Electric Company  (Megalopolis) and a tile factory (Kerasitsa).

[3] In the present thematic unit, we have also included an itinerant grocer who, however, was not from Vlahokerasia.

[4] Pending is the writing of a more systematic history of the “Agricultural and Credit Cooperative of Vlahokerasia.”

[6] For some grocery stores in the collection, the founders and protagonists were the parents and grandparents of the businessmen shown in the collection. For the “Bahanas” store, it was Lefteris’ grandfather, Georgios Ap. Sourlas, for the “Kotopoulis” store it was Aristeidis’ father, Constantinos Ap. Sourlas, and for the “Giannelis” store, it was Alecos’ grandfather, Giannis Mitsios. In accordance with Lefteris Sourlas, Constantinos Sourlas worked for a decade in the U.S. in the beginning of the 20th Century, returned to the village with plenty of dollars, became a big merchant in the region, founded the store “Kotopoulis” and induced many compatriots to emigrate to the land of promise.

[7] In regard to the kiosks and cafés, we are referring to the businessmen/businesswomen and not necessarily to the property owners.

[8] For the folklore collections of Vasilis Stasinos, Angelos Bistolas and Alecos Mitsios (“Giannelis”) and the rationale for founding these collections, see the thematic unit on «Views, Neighborhoods and Houses of Vlahokerasia”.

[9] We have in our minds the compatriots Constantinos Tzavellas, Dεmοsthenis Iliopoulos, Georgios Sakelariou and Eleftheria Kopitas. For the first two, see the unit on “Vlahokerasiotes in Medical Sciences and Applications”.