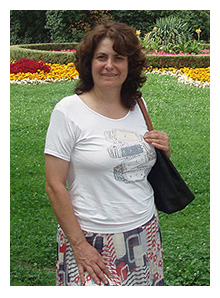 Angeliki Katsafanas was born in Vlahokerasia, daughter of George and Magdalene Kontogiannis - Katsafanas. She graduated from the Philosophy School of the University of Athens and worked unfailingly as a teacher in Secondary Education schools, investing all her powers in the support of the public school and trying to maximize the beneficial effects for all the children of our country.

She served in the Gymnasium (Junior High School) of Vlahokerasia, and, for many years, was the principal of the school. She fought to make the school – which she herself had attended – a cradle of culture for the wider region. not only a place for learning but also an attractive pole for humanitarian conduct. She organized numerous high-level cultural events, highlighting the traditions of the place, its history and other important aspects.

She also felt it was her duty to fight through the institution of local government, in order to honor the high-level of trust shown toward her by her fellow citizens who for four consecutive four-year periods elected her to represent them in the Μunicipal Council. She also held the post of President of the Skiritida Μunicipal Council and offered her compensation accruing to this office, mainly through the Deposits and Loans Fund, to the Skiritida Municipality Associations for public-beneft projects and activities.

She has written articles published in several print media and for three years has been the director of the newspaper "The Voice of Vlahokerasia", aiming to become the unifying creative forum of Vlahokerasiotes. Decisive is her contribution to the folklore data collection for the Vlahokerasia Digital Museum and the preservation of the region's history.

She resides in Vlahokerasia, married to Constantine Brousalis and has three daughters.